If you are looking for a gaming laptop that can perform well but not cut a huge hole in your pockets, getting an RTX 3060 laptop is the best. RTX 3060 laptops are capable of running all modern titles at high settings at 1080p. It can even run games at 1440p, but you will have to optimise the settings more. RTX 3060 is a mid-range graphics card with 6GB VRAM and 80W to 120W TGP. People often debate between rtx 3060 and rtx2070, which graphics is better, RTX 3060 is a perfect choice for casual to semi-pro gamers who plan to save some money and game at 1080p resolution.

RTX 3060 is the most popular graphic variant in the market right now, and many laptops use RTX 3060. But which is the best RTX laptop? Here is a list to help you narrow it down to the best RTX 3060 laptops. 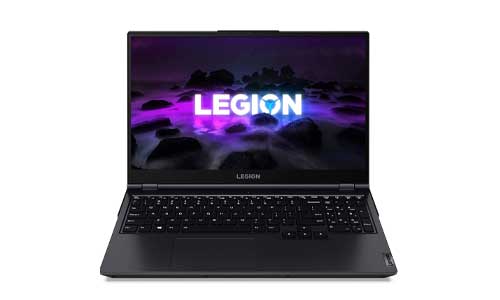 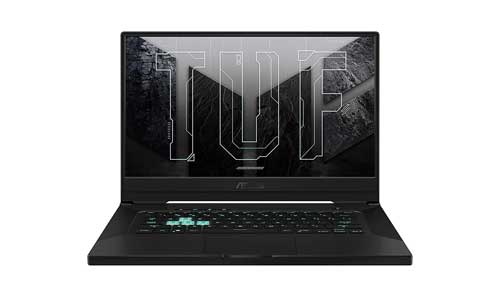 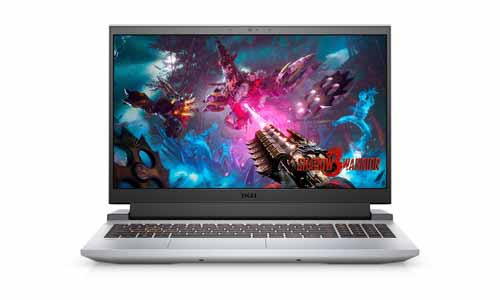 Lenovo Legion 5 is a more budget-oriented gaming laptop from Lenovo. Although it costs more than other budget gaming laptops like Asus TUF or HP Victus, it has much better specifications. Powered by Ryzen 7 5800H, you can expect an excellent battery life with this laptop. It uses a full-power GPU at 130W TGP, meaning there is no compromise on performance.

Even though it uses higher TGP graphics, I did not see any problems with thermals or thermal throttling. The best thing about this laptop is the 2TB SSD compared to the 1TB SSD given by most laptops in this price range. This saved me around ₹8000 to ₹9000 on getting an extra 1TB of SSD storage. With all these features is no brainer that lenovo legion 5 is among the best windows 11 under 1 lakhs compared to its over priced competitors.

The laptop also gets 16GB RAM which comes in a dual-channel mode which is again a good thing compared to having RAM in a single channel since dual-channel mode gives you a considerable amount of performance boost. The display on this laptop is brilliant, with high brightness, a decent refresh rate, and an amazing response time of less than 5ms. This makes it very apt for competitive and e-sports titles.

The ASUS TUF DASH laptop gives you 16GB RAM in a dual-channel mode, which is better than a single-channel. With a 1TB SSD, you can upgrade the storage to 2TB and the RAM to 24GB. It has 5 Heatpipes to draw away heat from RAM,VRAM,CPU,GPU.

Asus TUF lineups are another performance budget-oriented laptop from Asus. This particular TUF Dash F15 is powered by Intel Core i7-11370H, a fairly powerful processor (weaker than i7-11800H). It uses RTX 3060 at 85W, which is close to full power, but it does sacrifice some performance due to lower power.

The laptop offers a good display and a higher refresh rate for the sacrificed performance. The display is an IPS panel that offers vibrant colours and enables a wider colour gamut. It has 100% sRGB, which is helped me with creative tasks like photo or video editing since they require better colour reproduction. It features a 240Hz refresh rate panel, although the response time could have been better. I didn’t notice any lag while playing open-world games like Horizon Zero Dawn, but it might matter for hardcore competitive gamers.

The battery life is decent (you can get better battery life with Ryzen processors but will sacrifice performance a little) because of the higher refresh rate and brighter display. I was able to squeeze out more battery life by lowering the refresh rate while on the battery. With good display and decent specs at a relatively lower price, no wonder why asus is considered as one of the best non-chinese laptop brand in India and the Asus TUF Dash F15 one of the best RTX 3060 laptops in India.

Powered by the Ryzen 7 5800H, this laptop’s battery life is impressive. I was getting around 6 to 7 hours of battery life with moderate usage. This laptop’s display is also good, with 100% sRGB colour coverage and a 165Hz refresh rate.

Dell G15 series makes good-performance gaming laptops, but they are often expensive. This particular variant of Dell G15 is a good value laptop. The RTX 3060 is 115W TGP graphics which is very close to full power. This is impressive considering the price of the laptop. I was able to run most of the modern AAA titles like Control, Horizon Zero Dawn, Red Dead Redemption 2, and GTA V at the highest settings at 1080p resolution.

Considering the power limit, the laptop does get hot while playing or even at normal tasks. Although it doesn’t have a thermal throttle, the laptop can get pretty warm if you are using it on your lap. The amount of storage you get is underwhelming. With only 512GB SSD storage, the storage is disappointing since most laptops in this price range offer 1TB storage. The RAM is in dual channel mode with 16GB DDR4 memory. You get the option to upgrade both RAM and storage.

This display’s response time is not good since it uses the WVA panel instead of an IPS panel. It also results in a worse viewing angle compared to the IPS panel. Although I was getting accurate colours and a bright display, it did suffer from poor viewing angles and higher response times. Well, the laptop performs well despite its shortcomings in the display and relatively poorer thermals. If you can ensure good cooling (with cooling pads), you can enjoy any game you run on it. 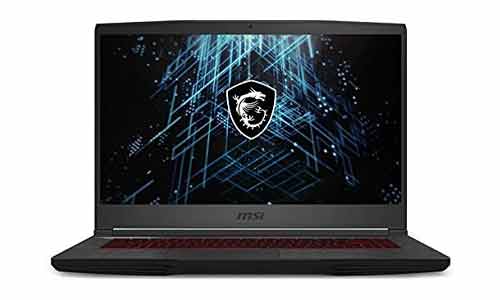 MSI GF65 Thin is a unique laptop and is a strictly budget option. If your budget is very tight, MSI can save you. It costs less than ₹80,000, whereas most RTX 3060 laptops cost close to 1lac or more. It is also the cheapest RTX 3060 laptop.

Well, it has cut some corners to reduce the cost. It takes on a big performance hit since it uses the old i5-10500H, which is weaker than most processors of the 11th gen or even 4000/5000 Ryzen processors. But, I did not notice any bottleneck in the GPU since the RTX 3060 used in this laptop only runs at 75W.

Because low-powered graphics sacrifice performance, this reduces the cost significantly. Even though the performance is not the best, it is a good value considering the price. Despite the hit in performance, the display of this laptop is impressive. Although it doesn’t have 100% sRGB colour coverage, MSI does a great job calibrating the display for the best colour accuracy possible. It was hard to distinguish this display from the better ones with 100% sRGB unless I looked too hard.

The battery life is underwhelming, although it might not be a problem if you use it for gaming since you won’t run it on a battery. It also sacrifices the build quality to cut costs. I noticed a decent amount of flex on the keyboard with a plastic build, and there is also the problem of screen wobble while typing. If your budget is very tight but you still want a good gaming laptop for casual gaming or even competitive gaming, this is the best RTX 3060 laptop you can pick up. 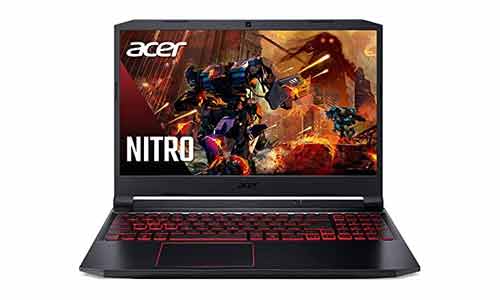 Acer Nitro 5 uses hybrid storage with 1TB of HDD (slower) and just 256GB SSD (faster). It uses an IPS panel which does a good job of being bright and has decent colour quality. Powered by the Ryzen 5 5600H and 95W RTX 3060, it does provide good performance for 1080p gaming.

Acer Nitro 5 is a more budget-oriented lineup from Acer which focuses on providing the best performance for the price. With the combination AMD ryzen processor and rtx 3060 graphics performance, you can run any game comfortably at 1080p.

Even though it uses a Ryzen processor, the battery life is something that could have been better. I was getting just around 4 hours with moderate usage on battery. Even though it performs well despite being a laptop in the sub-1lac range, it has made some weird choices with RAM and storage.

You get 16GB of DDR4 RAM, but it is in single channel mode, which may result in poorer 1% lows. I saw sudden frame drops, mostly due to single-channel RAM. If you want to run it on dual-channel mode, you must add another 16GB of RAM, costing you around ₹6000 to ₹7000.

While most laptops in this price range offer 1TB SSD, this is a weird choice since 256GB is virtually unusable in modern laptops. I exhausted the 256GB SSD with just one game installed on it, along with the OS. The display is nothing great. Although I noticed the display has better response times, and the display felt smooth with a 144Hz refresh rate. 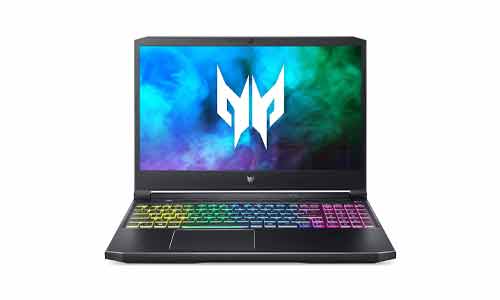 Powered by the 11th Gen Intel’s top processor, the i9-11900H, you can run CPU-intensive tasks well with acer predator helios 300. The display on this laptop is impressive, with around 4ms of response time and a 360Hz refresh rate.

The Acer Predator series is Acer’s flagship gaming laptop lineup and offers top-notch performance. The RTX 3060 used runs at the max TGP of 105W, close to the full power but still leaves some performance on the table. Given the higher power graphics, the laptop mostly stays cool, and thermal throttling isn’t an issue. While running Cyberpunk 2077 at medium to high settings, which pushes the GPU, I did not notice any thermal throttling.

The 100% sRGB ensures maximum colour accuracy, and the display is bright with a peak brightness of 300nits. The display worked really great for me while playing games like Valorant, Fortnite, and CS: Go. I also enjoyed most AAA titles at the highest settings, thanks to the high performance and smooth tear-free display.

It’s a trademark of Acer to provide hybrid storage. Out of the box, it comes with 1 TB of SSD storage, but you can upgrade the storage to up to 2TB SSD plus 2TB HDD. This helps store large, unused data in HDD, which is cheaper than SSD. It features 16GB of DDR4 RAM in a single channel which is not ideal but doesn’t cost much in terms of gaming performance. You can upgrade the RAM to up to 64GB.

Powered by Ryzen 7 5800H and 95W RTX 3060, hp victus offers great performance, capable of running most modern titles at the highest settings at 1080p. The display is bright with a 165Hz refresh rate. Equipped with 16GB RAM in dual channel mode, you upgrade the RAM to up to 32GB.

HP Victus is a rather new lineup from HP, mostly replacing the Omen line of laptops. HP Victus 16 offers a great value in terms of its hardware. Since this HP Victus features a QHD (1440p) display, the performance took a hit, but with RTX 3060, I ran all the games at 1440p, albeit with optimised settings. The display is rather impressive considering the price. It offers 100% sRGB and IPS panels, resulting in great colour accuracy and quality.

But, I noticed a lag in terms of response time, but it didn’t matter much while playing any games (unless you are a serious competitive gamer playing games like Valorant or Fortnite) It should be noted that HP Victus has a 16.1-inch screen which is slightly larger than the standard 15.6-inch screen that most laptop has.

This laptop has an issue with screen wobble. The screen wobbles quite if you place it on the table and disturb it. It was weird to see that the screen doesn’t wobble much while typing, but care should be taken while using the laptop to avoid aggressive wobbling. A dual-channel RAM improves the 1% lows and boosts gaming performance over a single-channel memory configuration.

The only downside of this laptop is poor battery life. I was only getting around 3 to 4 hours of battery life with moderate usage. Battery optimization is not done well. The laptop runs pretty hotly, but you won’t experience thermal throttling even at max performance. If you are looking for a good-performance laptop with a QHD display, HP Victus 16 is an amazing laptop to pick up and one of the best RTX 3060 laptops on budget.